Boys Lacrosse: After first-round cakewalk, Radnor ramping up for Conestoga

Through the inclusiveness of the PIAA Tournament, Radnor got a different kind of challenge Wednesday.

It wasn’t necessarily on the field in a 15-2 romp over Division 2 champion Crestwood; it was the task of not playing down to an opponent, a rare subpar adversary for a team accustomed to playing elite teams in District One’s crucible of challenges. 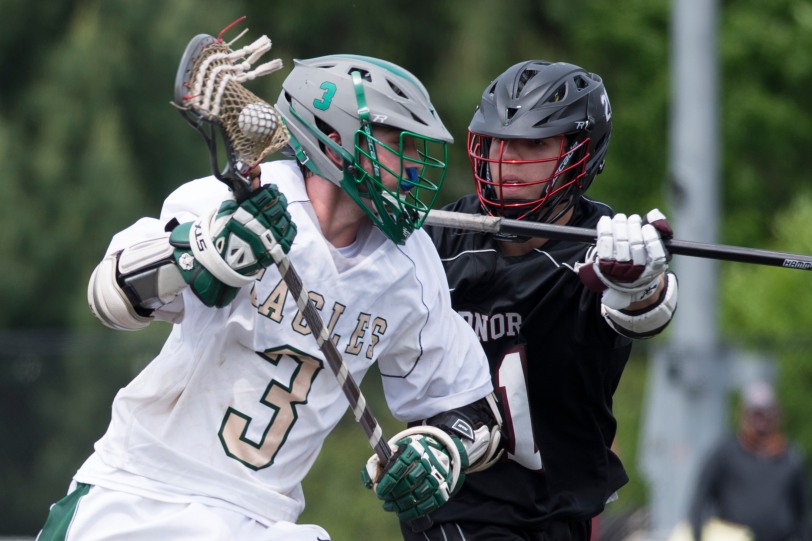 Radnor defenseman Mike Farnish, right, checking Bishop Shanahan’s Alex Wagner during the District One quarterfinals May 16, will lead his Radnor team into the second round of the PIAA Tournament against a familiar foe in Conestoga Saturday. (Times Staff/RICK KAUFFMAN)

According to LaxPower’s state rankings, Crestwood checked in at 129th in the Pennsylvania; the closest analogue among the Raiders’ previous opponents is winless Upper Darby, in 139th.

That vast disparity in talent led to a more than a few ragged moments for the Raiders (18-6) Wednesday at Dallas High. Radnor squandered an uncharacteristic amount of possession, had some unusual lapses is covering shots and didn’t score as often as their astronomical shot total of 44 might suggest.

Much of that is due to Crestwood’s game resistance and the fact that, try as they might, Radnor was never going to beat Crestwood by 30 goals, even if they had enough opportunities to make that happen.

It may be splitting hairs in the appraisal of the execution, but the process is what the Raiders’ most emphasized Wednesday, keeping their approach constant despite the level of opposition.

The next opponent is abundantly familiar: Conestoga, the team that beat Radnor in the semifinals of the District One Tournament, 6-5, just last week. Radnor had taken the regular-season meeting, 8-3, April 9.

The semifinal date was a struggle for the Raiders, who led early but seemed to fall asleep before a pair of fourth-quarter goals flattered the final scoreline. Conestoga managed to shut out Radnor for essentially an entire half – from Phil Regan’s goal at 6:22 of the second quarter to Clayton Proctor’s at 4:47 of the fourth.

The only lasting concern for Radnor off of the first-round romp probably comes in their shooting ability. They got myriad open looks, but didn’t always choose the right one or make the most of their shots.

“I think we were just taking low-percentage shots,” said attackman Drew Ryan, who scored five goals. “We talk about shooting for percentages, taking the best shots, not shooting sidearm.”

With Crestwood in the past, the overarching emphasis for Radnor is in playing its best at the end of the season. While they’ve been hit-or-miss at times in the postseason – the middle two quarters against Conestoga and the first frame of an eventual 11-7 win over Central Bucks East in the District One third-place game stand out – they are playing at a generally high level, which is their primary aspiration at this juncture of the season.