The weather has graciously permitted us at least one sport this frigid spring season through the goodness of turf. As pretty much the only show in town for the last week, the lacrosse teams haven’t disappointed. It’s a crowded field in the county as per usual, and there are plenty of battles yet to come that will drastically alter this hierarchy. Here’s where we stand after one week. (Records through Saturday, March 28.) 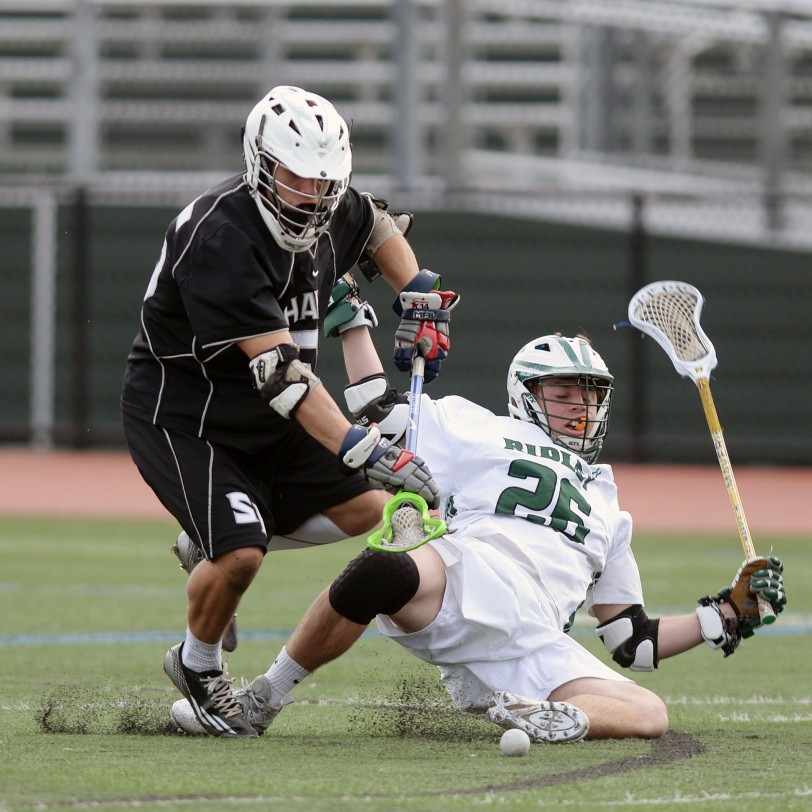 Thanks to their decisive win Thursday, Cade Heverly (right) and Ridley slide into the Super 7 ahead of Hunter Mazur and Strath Haven. (Times Staff/TOM KELLY IV)

The distance between Nos. 1 and 2 is slight, and we won’t have to wait long to ponder it as Haverford School and Episcopal Academy meet April 7. When you look at the scoring numbers, the Fords are just so deep. They’ve got Grant Ament orchestrating from behind the net, Forry Smith on the crease and Drew Supinski and Dox Aitken as great shooters off the dodge. So many guys able to take over games, as Aitken illustrated to great effect Friday.

Haverford School has the edge in overall attacking talent, though Curtis Zappala could be the most talented individual of the bunch. Certainly, in the early going, Zappala has animated a good group of scorers – including Eric Haab, Chris Friedman, Connor Ringwalt and Jake Martellucci – that wasn’t quite fully formed last season. The potential game-changer in the Haverford matchup could be Christian Feliziani at the X.

The Jaguars have taken the early initiative in the Central League, and it has been richly deserved. Wins over Penncrest and Radnor in the first week have clearly stated their title credentials. Matt Moore is asserting himself the way you’d hope someone of his talent would, and as just a sophomore, he’s coming a dominant force who can dictate games. The biggest factor, though, could be Daniel Lanham’s emergence at the X, which included a 12-for-22 day against a very good FOGO in Radnor’s Tommy Meyers Tuesday.

The cupboard is anything but bare for Wayne Matsinger, and the Lions hung tough against GV Thursday. The midfield may be the area that took the biggest hit courtesy of graduation, with Alex Bonnett and Drew Hanna ensuring the attack still turns over. The midfield changes put a premium on the defensive experience of Ryan Granger and Ryan Schultz.

The Raiders are here by virtue of losing to Garnet Valley by more than Penncrest did, which is to say that their placement relative to the field is likely to be fluid from week to week. Radnor certainly has the best returning goalie in Alex Andersen, and recall that it did take some time last year for Drew Ryan, Jack Norton, Jack Wilson and the other attacking cogs to start putting up the crazy numbers they posted late in the season.

The Green Raiders may just have one of the best defenses in the Central League, led by Jon Lyman and Steve Cropper. The schedule has been favorable enough early, allowing them to get their bevy of offensive weapons off the mark. But what most stands out from the Green Raiders’ first four games is holding a solid Strath Haven team to just one goal.

The record is unsightly, and the loss to Strath Haven could be one that they look back on with regret. But they were within a goal of Conestoga Friday, leading when the game was suspended due to lightning a night before. They have their weak spots, and while Dan Wasson has stepped up offensively, someone (like Mike Gerzabek did last year, perhaps?) has to assert himself to take some of the pressure off Lucas Spence.

Honorable mention: Strath Haven (1-1, the win over Springfield would’ve entitled them to jump the Cougars in the ranking had their performance against Ridley two days later been just about anything but a 9-1 loss); Haverford (2-1, the win over Marple Newtown gives them the edge here, and you have to be impressed that the Fords have played three one-goal games, claiming 9-8 wins over Marple and West Chester Rustin); Bonner-Prendergast (4-0, whether they’ll crack the top four in the Catholic League remains an open question to me, but the team is winning by an average of almost five goals per game).