Boys Basketball: ‘Nothing to lose’ for Marple against Methacton

Last season, we ran game-by-game previews for the first round of the District One Class AAAA Tournament. This is the second installment of this year’s series, and over the next two days, we’ll be looking at each and ever matchup featuring Delco teams.

Marple Newtown’s season was dead in the water just four weeks ago. Mired at 7-9, including 4-6 in a Central League that was mediocre at best, the Tigers’ hopes of a District One playoff bid were looking slim, unless something changed. 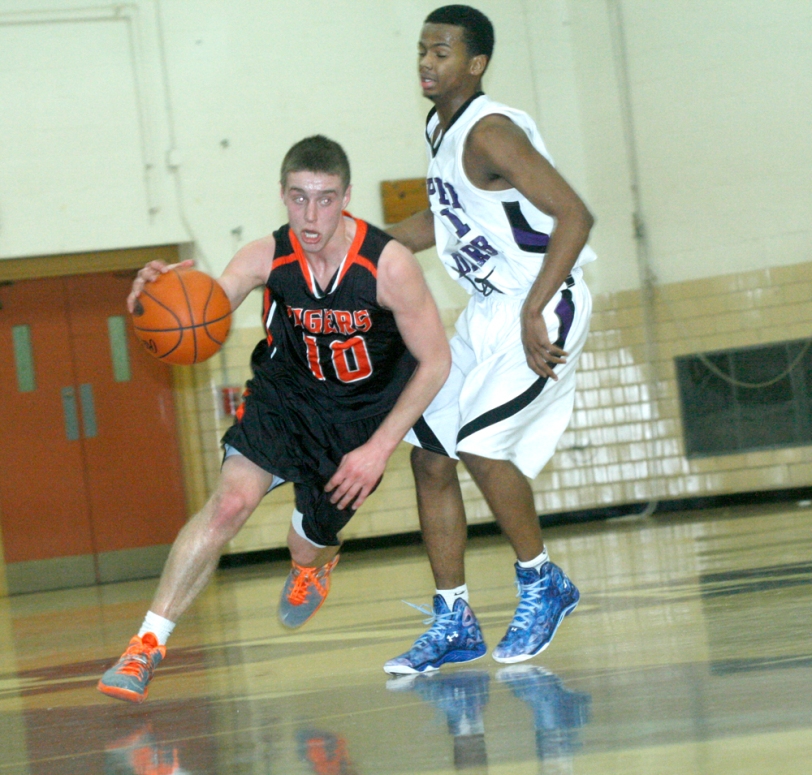 Marple Newtown’s Nick Giordano, left, running by Upper Darby’s Quadir Turner in a Jan. 30 game, and his team are relaxed despite being big underdogs to No. 2 seed Methacton in the District One playoff opener. (Special to the Times)

Six consecutive wins later, and the No. 31 seed has gotten its second life, entering as a major underdog with no pressure on its shoulders.

“You’ve got nothing to lose,” Marple coach Brian Shane said Sunday after his team eked into the postseason. “We wanted to get in, get a chance to play. It’s a great opportunity. We don’t have anything to lose.”

The Tigers will face a tough and long test from the Warriors, a battle-tested team that made states two years ago and has advanced to each of the last four Pac-10 championship games, winning in 2012 and last week against Pottsgrove.

The main scoring threat is 6-3 guard Justin Ardman, while 6-3 TJ Tornetta is likely the person to be tasked with trying to mute the influence of Marple’s leading scorer Nick Giordano. Sean Mann, a 6-2 guard, can also score, while the Tigers short lineup will be tested by matchup problems Tom Dyer and Chris McCarthy, both 6-6 and able to use their height to score. That puts a big burden on forwards Marcus Weathers and Austin Fullington to hold their own in the post, while Methacton’s half-court aptitude may behoove Marple to press and up the game’s tempo.

It’s certainly a clash of styles, with Methacton limiting teams to around 48 points per game this season. Marple, meanwhile, is averaging 65.8 ppg. They’ve improved in low-scoring games, though, with three wins in their six-game streak coming in games played in the 50s, including the last-minute win over Upper Darby that essentially served as an elimination game for the two.

Whatever the outcome, though, Shane has no regrets for this season. His team has gelled as well as he could’ve hoped, and they’ve accomplished a great deal in responding to adversity down the stretch. The playoff appearance is just the cherry on top.

“It’s just an opportunity to go out there and compete and get another game and see where we stand with rest of the teams in the district,” Shane said.