Last season, we ran game-by-game previews for the first round of the District One Class AAAA Tournament. This is the first installment of this year’s series, and over the next two days, we’ll be looking at each and ever matchup featuring Delco teams.

With Harriton’s net still draped around his neck Monday night, you could almost hear the gears shift in Brett Foster’s head. 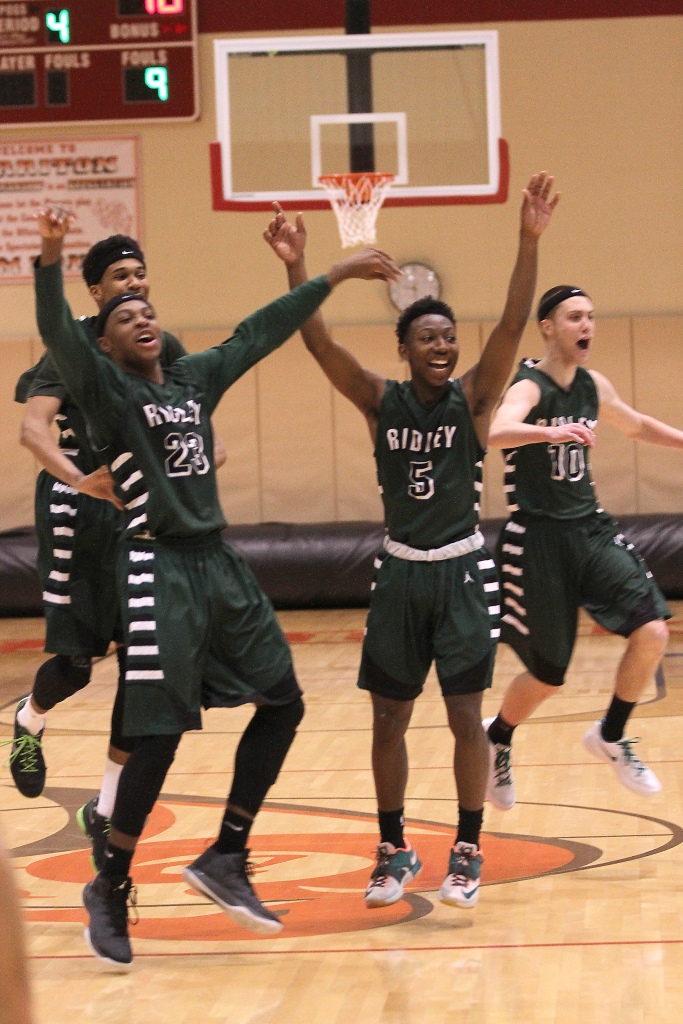 The celebration for Ridley’s Ameer Staggs, left, Brett Foster, center, and Ryan Bollinger, was on Monday night after winning the Central League championship at the expense of Conestoga. But it’s right back to business Friday against Rustin. (Times Staff/ROBERT J. GURECKI)

“It’s great,” Foster said of the Central League championship his Ridley team had just won, hence the new nylon jewelry. “It’s been a great season, but it’s not over yet.”

Ridley’s ambition this season stretches much farther than just Monday’s win over Conestoga in the Central League title game. The Green Raiders (19-5) have all the momentum in the world, winners of four straight and secure in the knowledge that they’ve just knocked off the top seed in the District One Tournament.

“Our confidence is very high,” senior forward Ameer Staggs said. “Our chemistry is clicking right now. We’re playing the best basketball we’ve played all season. We keep working and working, and we can beat any team in the district if we keep working hard.”

A lot of teams can talk about peaking at the right time, but No. 9 seed Ridley’s rise has a measurable component to it: They’re finally playing their preferred lineup. With forward Justin Dawson (knee) limited at the start of the season and Staggs missing the last five games of the regular season with a concussion, coach Mike Snyder hadn’t been able to dial up his preferred frontline of Dawson, Staggs and Julian Wing until the Central League tournament. The results – a decisive win over Lower Merion, followed by vanquishing Conestoga – speak for themselves.

The byproduct of that waiting for their optimal lineup is that Ridley has developed other ways to hurt teams. They have outside shooters but aren’t reliant on the three.  They have an excellent point guard in Foster who can score or distribute. They don’t have overwhelming size, but they have bigs that play taller than their height and who can step out of the post to defend or produce offensively.

To be clear, this is not the Rustin team that went to the District One semifinals and PIAA quarterfinals. There are holdovers from that team, but most, like guard Andrew Chobany, have had to go from complementary pieces to more primary roles this season. It’s a guard-heavy team, featuring Chobany, Mike McKnight and Ryan Loucks, while 6-5 center Brennan Halverson takes up space in the lane.

But Rustin will run into similar problems as many of Ridley’s opponents this season. They’ll have a hard time matching up with a lineup featuring four players adept at creating offense off the bounce. They’ll find it tough to stay in front of Foster on his drives to the net, and a 9-for-15 performance from 3-point land in the Central League title game will give pause to teams hoping to zone Ridley out.

They’ll also face a team brimming with belief and determination.

“You’ve just got to play tougher every second of the game,” Staggs said. “…We just kept hanging tough throughout the game, kept wearing them down, wearing them out and taking advantage of our speed.”