Meets are always few and far between before Christmas for the swimming crowd, so there’s plenty of season ahead in the six or so weeks before the championship season kicks off. Three teams sit without a loss through the season’s early juncture, so something has to give soon. With two meets per squad this week in the Central League, teams will be making up for lost time quickly. Here’s where they stand as teams, plus individual top times. (Records through Jan. 4; previous rankings based on preseason Super 7.) 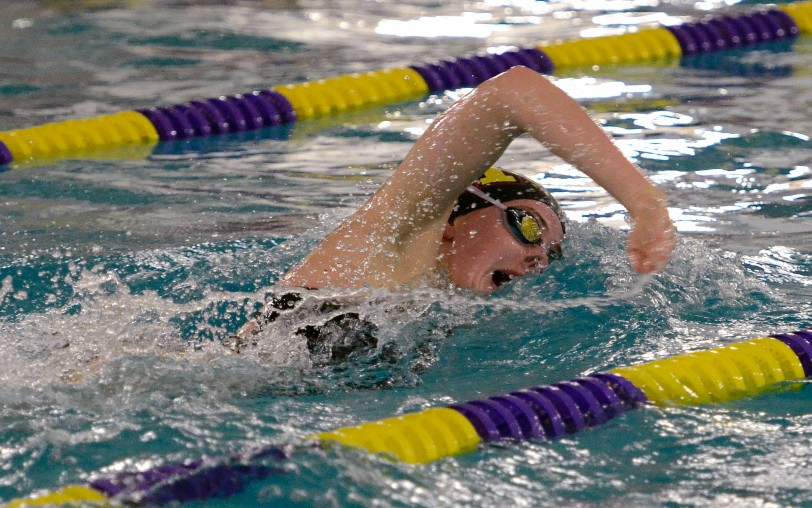 Madison Hart, seen here winning the 100 free against Upper Darby, is one of the main reasons behind the Fords’ 5-0 start to the season. (Times Staff/TOM KELLY IV)

The lone loss is the big one, a narrow setback to Germantown Academy. There shouldn’t be any other hiccups during the Inter-Ac slate for EA, which should have them sailing on into the Inter-Ac Championships, then Easterns.

The Panthers haven’t been truly tested yet, scoring in triple digits in all four of their wins. Only one of those bested teams, Ridley, is in the Super 7. Megan Burns has gotten off to a flying start to the season, and the 1-2 diving punch of Eleni Pappas and Phil-Ann Dixon is a potent weapon in dual meets.

Separating the Fords from Radnor is difficult on paper. The Fords get the edge in the reckoning simply because of their talent at the top line with Emily Wolfe, Madison Hart and Ilira Zherka. Finding the depth to contend with Radnor when the teams meet this Wednesday is what will determine if they can get the better of the Raiders.

The emergence of freshman Julia Cullen has been a major boon to the Raiders’ relay depth. Combined with the rise of Emily Moyher as one of Delco’s top sprinters, the Raiders boast a roster brimming with talent. Those young swimmers will be put to the test this week with meets against Haverford and at Conestoga, two collisions that should be very informative about the Central League hierarchy.

The fact that Gab Rudy picked up where she left off in her stellar freshman year is no surprise. But a big reason why Ridley has had so much success (the only loss is to Haven) is that Kiera Wadsworth has started the season strong, sitting in the top eight in the Central League in five events. Coupled with a couple of solid freshmen sprinters, the Green Raiders have developed impressive depth.

The Jaguars’ depth is mostly in freestyle thanks to Skyler Berardi and Jordan Stansfield, but with the versatility of Lucy Townend, they have some answers at other locations in the lineup.

The sheer numbers of top-flight swimmers aren’t there yet for the Lions. But they have two notable finds in freshmen Shannon Jackson and Lauren Isaacs who will be important pieces to build around.