The dust has settled on another season, and it’s time to see where everyone stands. There’s been plenty of changes this season in the Super 7 (not to mention in the people responsible for crafting said Super 7), and consensus remains elusive. For the most part, however, the cream rose to the top without much resistance, and the first few places were fairly easy to peg. Then things get messy.

Without further babbling, here’s the final order for Delco: 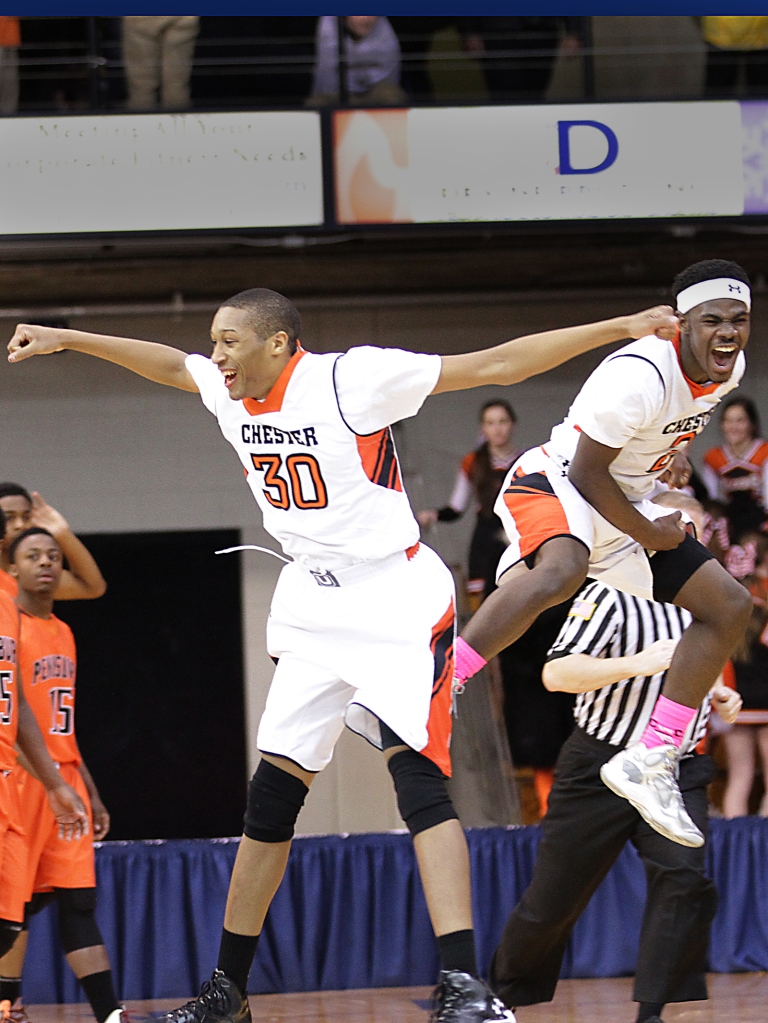 Brewster Ward, Keyonte Watkins and Chester are No. 1 in the county. How original. (Times staff/ROBERT J. GURECKI)

The postseason has restored order to the Delco basketball world, and Chester once again finishes the season on top. The ending wasn’t what the Clippers would’ve wanted, and with La Salle coming back to earth in the PIAA Class AAAA final, the game of ‘what if’ is palpable. But what really separated this team from the pack is their character. There were plenty of opportunities to fold, to throw up their hands in frustration that the experiment of assimilating so many different, new faces wouldn’t work. It could’ve happened after the loss to Penn Wood. It certainly could’ve happened after the shocking upset by Interboro, or after three quarters in the gutsy come-from-behind victory over Pennsbury in the District One title game. Much of that has to do with coach Larry Yarbray, who I think has done one of his finest coaching jobs given the departures from last season’s team and gets my vote as Class AAAA coach of the year. The fight in the team – from the irrepressible will to win in Mahir Johnson to the dogged low-post determination of Tyrell Sturdivant – is why they sit atop the heap.

It’s terrible to think that a putback here or there dramatically alters the fate of this team. That was the story in the regular-season meeting with Neumann-Goretti, and it was the case again in a one-point PIAA tournament ouster at the hands of Philadelphia Electrical Charter. There’s no doubt that this Carroll team was talented, arguably the most talented in Delco for players one through eight. But they never seemed to get it humming against the good teams from Philly, not against Roman or Goretti or PET. Their five losses are nothing to be ashamed about – two to the Class AAA state champ , one to the team Goretti beat in the state semis, one to the top-ranked PIAA AAAA team (and top PIAA tournament flop) Roman and one to Oak Hill Academy. But they finished with deafening ‘what ifs’: What if any one of those games against the Philly schools are different? What if one of their three Division I talents could’ve willed them to victory in any of those games? Chester managed to win at least one of its big games this season. The hard-fought win over Abington Heights notwithstanding, Carroll came up short, and that’s why they end up behind the Clippers.

There’s not enough praise that can be lavished on Keith Heinerichs’ team (though I guess you could say that we’ve certainly tried). The first states berth in 43 years is a massive accomplishment, and that’s why they land this high. You could argue that if you put the Fords and Penn Wood in a gym in January, the Fords might not come out on top. But when the chips were down and all those other clichés were in force, the Fords passed their tests, enough to get to the state tournament. That accomplishment is a primary goal for many teams at the start of the season (it would’ve been a lofty one for the Fords this season), and a program-altering achievement for the Fords’ long dormant club.

In late January, it would’ve been unthinkable for me to consider a District One delegation to the PIAA Class AAAA tournament that didn’t include the Patriots. And surely their playbacks finale against Methacton would’ve had a different result had the Patriots had the services of forward and high-energy heartbeat Jeff Padilioni. They also weren’t done many favors by the schedules being pitted against eventual PIAA quarterfinalist Lower Merion is a grossly mis-seeded second-round game. But the fact of the matter is that the Patriots, despite their Del Val Championship, didn’t do quite enough to make it to states. For all the success Malik Jackson had this season, the Patriots were clearly a different team in games, like the Methacton loss, where he was limited offensively to totals like 12 points.

If it wasn’t for Haverford, the Churchmen would have earned the honor as the team for which the whole most exceeded the sum of its parts. There’s reason to be excited for the future of this team, with fabulous freshman Nick Alikakos really asserting himself down the stretch and junior point guard Mike Jolaoso maturing by the game. The win over Haverford School on senior day was, to use the overused cliché I loathe most, a total team effort, and coach Craig Conlin got every ounce of accomplishment out of his players this season. With GA’s Tim Guers and the core of the Haverford School team returning next year, the Inter-Ac will again be tough sledding, but boy will it be fun to watch those teams go at it.

I find it hard to sit here and categorize this Haverford School as anything but underachieving. It’s not an exaggeration to call them the overwhelming preseason favorites to deliver their first Inter-Ac title in 15 years, and they end up 7-3 in the league. Top to bottom, bolstered by three surefire Division I talents (Eric Anderson, All-Delco Shawn Alston and Lamar Stevens) and more promising up and comers, they were easily the most talented team in the league. I know their season looks different if they pull out that win over Germantown Academy in overtime, but losing to Penn Charter and EA later in the season tells me that this wasn’t a championship-caliber team. Many of the pieces are back, so maybe next year is the year.

Here’s where tiebreaking margins start to involve splitting hairs, especially with five District One Class AAAA teams crashing out in the first round of districts. Four of those teams (Radnor, Academy Park, Penncrest and Upper Darby) lost to teams eventually qualifying for states. Academy Park’s first-round conqueror, Pennsbury, was the District One runner-up, even if Radnor’s opponent, Rustin, made the state quarterfinals. I give the edge here to Radnor. For one, they beat Haverford and Ridley. Penncrest’s late-season swoon hurts its case, and Ridley losing to a team that didn’t record a second-half field goal isn’t the most heralded of exits. Plus let’s give the Raiders a sentimental edge: Their first ever districts bid is something to hang their hats on.

Honorable mention: Academy Park (14-8; it’s been six years since the Knights had last made the postseason, and with Travis Smith and Jawan Collins back next year, the wait for the next berth could be significantly shorter); Penncrest (15-9; a five-game losing streak isn’t the way you want to finish the season, but something had to give with the way Penncrest was cruising through the regular season); Ridley (13-9; “hit or miss” is an accurate portrayal of the Green Raiders’ season. The goal next year, with some big underclassmen scorers returning, will certainly be consistency); Upper Darby (14-8; the loss to Haverford in the first round of districts would certainly have been different had Quadir Rice been healthy, even if the Royals’ level of play fluctuated wildly from game to game); Glen Mills (10-12; behind Yarbray, Heinerichs and Radnor’s Chris Monahan, next up in coach of the year voting would by the Battlin’ Bulls Tony Bacon. He took a team with no double-figures scorers where only two kids even played every game and got the better of eventual District One Class AAA champ Holy Ghost Prep for almost 30 minutes with three JV players logging considerable minutes. Talk about making the best of a difficult situation.)