In the heavyweight fight that I think we all believed would decide the Del Val title, Chester evened the score with Penn Wood at one win apiece with Tuesday’s 59-54 victory in Chester. A few extra observations from The High: 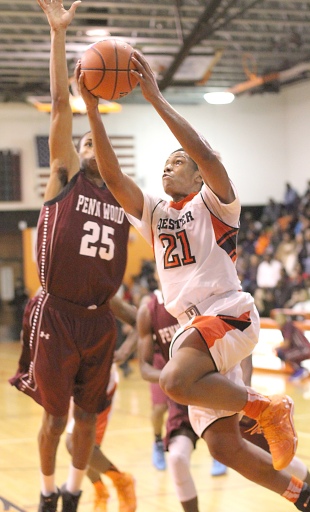 – I discussed plenty in the game story about the offensive contributions of Mahir Johnson and Conrad Chambers, who have seemed to develop a much better understanding of how to divvy up the ball handling and scoring responsibilities between them. But I don’t think I gave enough credit to those two for bottling up Penn Wood’s Malik Jackson. Averaging over 22 points per game, he finished with just 13 Tuesday on 2-for-12 shooting. Much of that was due to the solid on-ball defense of Chambers and Johnson, who drew the assignment of Jackson for the bulk of the game, and the collective ability to get a hand in Jackson’s face and limit him to 2-for-8 from three. (Plus he missed another, but was fouled and made three free throws.) Jackson had hit 52 3-pointers this season, one in each game, and he didn’t even attempt one in the first half Tuesday. That’s impressive defense.

– A reporter who shall remain nameless had a long conversation before Tuesday’s game with some people involved in the Chester basketball program raving about how the Clippers were among the county’s best at the free throw line, shooting over 70 percent. Then the Clippers went 11-for-23 at the stripe Tuesday, including a stretch of nine straight misses in the third and fourth quarters. Luckily, Penn Wood had just as frosty a touch from the line at 10-for-21. That combined 47.7 percent outing (21-for-44) belies what hasn’t been a terrible weakness for either side this season.

– Where the last meeting between the teams was a battle on the perimeter, this one was decided in the lane. As such, the bigs could’ve really exerted dominance. They didn’t. For Penn Wood, Jeff Padilioni had six points early in the first half, then attempted just one other shot the rest of the way. Amadou Kaba scored 10 points, but he missed two front-ends of one-and-ones and fouled out. Naeem East, despite a strong effort on the glass, was 2-for-6 from the field in the second half. And though their rebounding effort intensified after halftime, they weren’t able to deter the drives to the basket by Chambers et al.

– Chester’s bigs were more authoritative defensively. I had Tyrell Sturdivant for four blocks and seven rebounds, while Maurice Henry grabbed six boards in limited action. But both Sturdivant (who shot an uncharacteristically poor 2-for-8) and Gabe Adesina fouled out, leaving the Clippers to go small with Marquis Collins as the biggest guy on the court at times in the fourth quarter. (While we’re on the subject of defense, Keyonte Watkins had four steals, which deserves mention.)

– Chester, as it often seems to, gets spurts of productivity from players. They got off the mark (and into the lead for good, it turned out) thanks to Khaleeq Campbell’s seven first-quarter points, punctuated by only his seventh 3-pointer of the season. Adesina had nine points after halftime, including seven in the third quarter. And Johnson’s nine in the fourth quarter prevented the game from slipping away.

– As impressive as Chambers getting to the hoop was, so were the drives of Penn Wood’s Antonio Ward, who flipped up a couple of physics-defying underhand lay-ins that banked high off the glass and in. “That’s my game,” Ward said. “I do that all the time. I can scoop it. My coaches say it’s luck, but I do it all the time. It’s just a part of my game.”