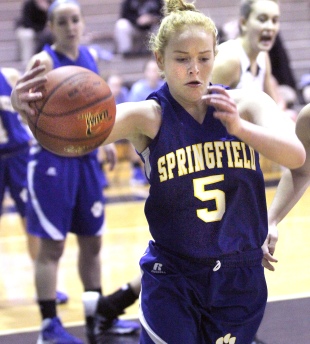 Springfield’s Maggie O’Connell saves the ball from going out of bounds in the Cougars’ win over Strath Haven Friday. (Times Staff/ROBERT J. GURECKI)

On the basketball court, the Springfield girls’ hot streak continued over Strath Haven, plus the rest of the Central League action. Elsewhere, Episcopal Academy’s hot shooting helped it down Notre Dame. For the boys, Ridley got contributions across the board to slug out a win over Haverford on a busy Central League night, while the rest of the action is led by Episcopal Academy’s ability to tip Malvern Prep. Haverford School wrestling pinned its way to a rivalry win over EA, while the Bonner-Prendergast boys bowling team scored a victory. In the pool, the Ridley boys booked an exciting win over Penncrest, while the Green Raiders’ girls team coasted to victory. And on the ice, Garnet Valley’s offense exploded in a blanking of Radnor.