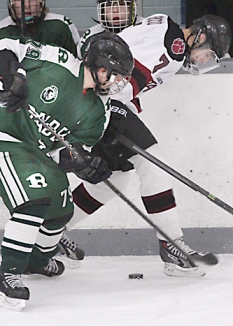 Friday night featured a matchup of Central League forces on the ice, with Garnet Valley shutting out Ridley, plus the other games from a busy evening. On the basketball court, Nick Giordano and Matt Bailey led Marple Newtown to a come-from-behind victory over Springfield, the Tigers’ first Central League triumph of the season. Elsewhere on the boys basketball schedule, Archbishop Carroll suffocated Conwell-Egan to drop them from the ranks of the unbeaten. Marple’s girls basketball team also had a big night thanks to 31 points from Rylee Power, plus all the other girls basketball action. In the pool, Summer Martin had a record-setting day in Strath Haven’s loss to Conestoga, while Mitchell Gartland’s fast 500 swim paced the Radnor boys past Harriton. On the mats, Jake Hervada’s pin completed Haverford School’s emphatic win over Springfield Chestnut Hill.