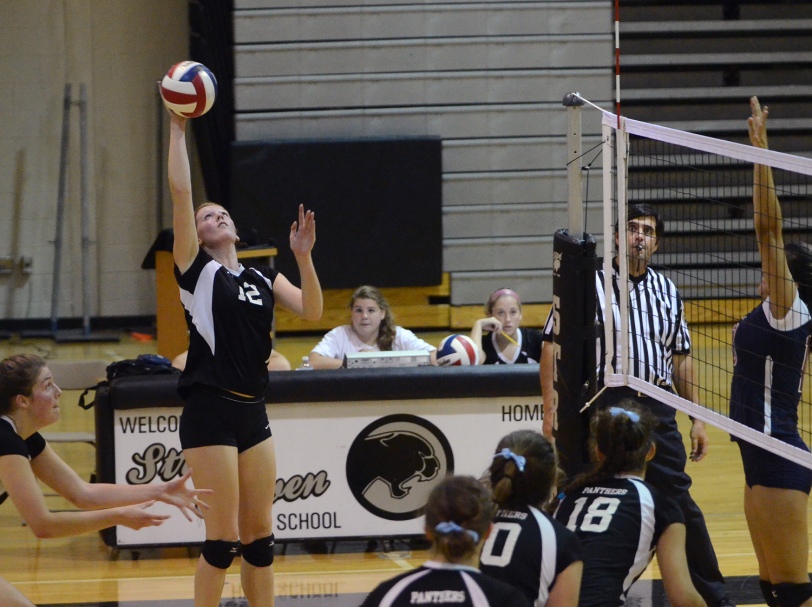 Same seven teams as usual. Can’t seem to do much about that. This is based off of matches played through Saturday, so anything that happens/ed today doesn’t matter toward this week’s Super 7. Find last week’s Super 7 here.

Can’t fault the Jaguars for losing to Downingtown East. The Cougars are legit, but it was a little surprising to see Mark Clark‘s team get swept. Elise Cummings kept up her strong season with 24 assists in a 3-1 win over Ridley, a match in which Brianna Plush hammered 14 kills and Nicole Clayton served up six aces. Jenna Hostetler‘s nine aces spurred a 3-0 rout of Upper Darby, while Maria Nicolaides and Kelly Sarabaugh also chipped in.

Pretty wild win over Cardinal O’Hara highlighted this week for the Panthers. Strath Haven coach Kevin Haney got so worked up that he had to make a detour to the hospital, but his team rallied around that (and an otherworldly performance from Alice Roberts) to down the Lions, 3-2, after digging out of an 0-2 hole. Brianna Fisher led a rout of Radnor with six kills and six aces, while Casey Blum and Brynn Anderson also had big matches. Ellie Stief, Roberts and Bridget Scott keyed a rout of Springfield.

Maybe I upgraded Penncrest too high (my bad, Sun Valley) but the Lions are playing really well. They got a win over Haverford – an admittedly depleted Haverford team -, swept Ridley and needed four games to beat Conestoga. That’s a pretty good stretch. Andrea Hartman combined for 50 digs in those last two matches, Diana Balta continued her strong freshman season and Gianna Gargiule continues to do strong work as the team’s setter. Tough stretch coming up with Garnet Valley and Haverford, but the Lions could be locked in as the No. 3 seed with merely one more win.

I truly think that this team is the third-best team in Delco when it’s healthy. PROBLEM: The Fords are not healthy. Not even close. They fell to Ridley today, 3-0, after sweeping the Green Raiders earlier this year. Arden Vizzard has a concussion. Bridget Newman could be out for the year with an ankle sprain and Katie Lane came back to the lineup, but her and her shoulder are still working things out. The win over Conestoga was nice, though. Can they bounce back to beat Penncrest Friday?

Chelsea Jones is pretty good at pretty much everything, as you can read in this week’s notebook. The Vanguards rolled over Bayard Rustin, 3-0, thanks to Madison McCunney‘s 16, Jones’ 15-kill, 19-assist performance and Jocelyn Romesburg‘s 17 digs. Not bad. Matches against Unionville and Downingtown West headline this week’s slate.

Man oh man, could the Lions have been skyrocketing if they could have finished off Strath Haven on the road. To hear coach Bill Collins tell it, both Meghan Czapka and Caitlin Fitz (19 kills, 14 digs apiece) were tremendous, but O’Hara couldn’t handle Roberts and Scott. Not the first team to not be able to, won’t be the last, either. Nicole Poissant was also sharp with 36 assists. Stiff tests with Bishop Shanahan and Padua Academy (Del.) are on this week’s docket.

Sam Conboy led the charge in a very nice win over Methacton. Conboy bashed seven kills, while Emily McCann dished out 14 assists and Victoria Glammer added a dozen digs. It’ll be interesting to see how the Patriots fare against Inter-Ac power Notre Dame this Wednesday. Other than that, it looks like a fairly nice stretch for the Patriots.