There’s many a common thread among the members of the All-Delco baseball team. You can divide it along lines of public, private and parochial, correlate it with other sports played, even look at it in terms of participation in all-star events like the Carpenter Cup (for the record, it was nine of the 12). 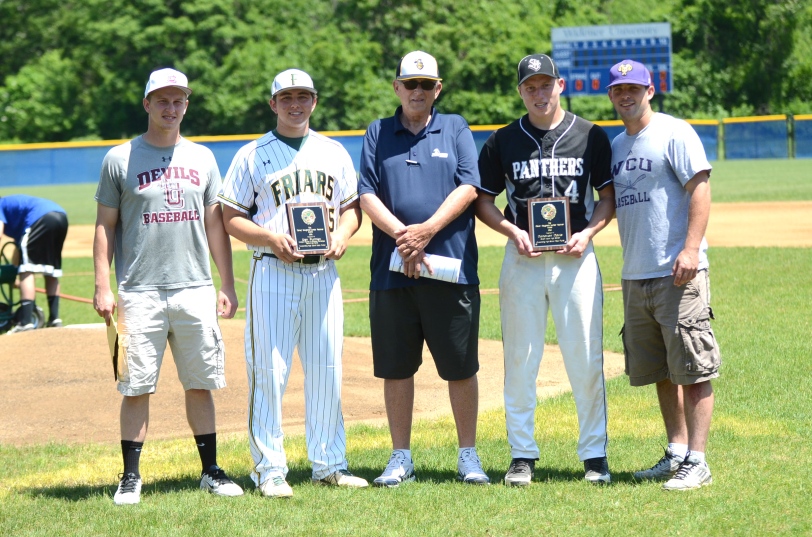 The players honored as pitchers of the year at the Joseph Barrett Memorial Game, Bonner-Prendergast’s Dan Furman (second from left) and Strath Haven’s Donovan Davis (second from right) both grew up playing in Media Little League. (Courtesy of Paul Bogosian)

But one of the more stirring statements about this team is this: Six of the 12 players selected this season played at one time or another in the Media Little League pipeline.

The members of the group all went their separate ways scholastically – Kevin Mohollen, Donovan Davis and David Splain to Strath Haven, Kevin McGowan to Haverford School, Cole Gamber to Penncrest and Dan Furman to Bonner-Prendergast – but there’s a special bond between the group that persists.

So what’s the common benefit from that Media Little League upbringing?

“I guess it was when we were 10 years old, a bunch of Brookhaven kids came over to Media and started playing little league. We started playing together, and it’s fantastic over there. It’s unbelievable. All the coaching over there was great, from 10-year-old to 12-year-old district ball, it’s just great competition. And we’ve seen all these guys in districts and what not. You’re just forced to play up to competition, like the guys that were on All-Delco.”

A look back into the archives shows just how true that is. The 2007 11-12-year-old team included Gamber and Archbishop Carroll’s Eric McGough. (To be fair, the best team that year was the Aston-Middletown district-winning squad that included Parkside and Malvern Prep’s Billy Ford, Penncrest’s Billie Buckwalter, Shane Donnelly and John Convery, Sun Valley’s Jake Burrell and Bonner-Prendergast’s Frank Saviski.)

Then there was the 2009 team, which won the Pennsylvania Eastern Regional Championship and was a win away from being Delco’s first state champ in two decades. Mohollen and McGowan were the headliners on the team, but they were joined by an impressive supporting cast. There was O’Hara’s Colin McGuire, Furman’s little brother, Steve, Haven’s Nate Engelka and Episcopal Academy’s Russel Rhoads. Being 11 and 12 then, they were all underclassmen this high school season, and if history is any indication, those are names to watch next spring when All-Delco season rolls around.

The lessons that led to the success on the smaller diamond have clearly translated upward.

“It’s just striving for perfection honestly,” said Splain, another member of the Brookhaven delegation that infused Media with talent. “It’s day-in ,day-out at practice, everyone’s committed all the time. I play at Nether Providence now, and it’s nothing like Media. I miss Media every day. I wish I could go back. It’s just a great group of guys. We went through a lot – lots of tournaments, good things, and great friendships.”

Part of that dynamic as they have grown and split off into their various legion and scholastic teams is the feeling of often having a friend in the opposing dugout … or, on gamedays, that extra motivation to do your best.

“It’s awesome, but the bottom line is that we still want to smoke each other when we play each other,” Dan Furman said. “There’s no giving in to anybody. But after the game, it’s a pretty cool relationship that we have with each other. There’s just things we remember from two-a-days in little league and stuff like that that we’ll never forget for like 30 years to come.”

For Splain, the fact that there was such a Media flavor to the All-Delco team didn’t come as a surprise. From a group of players that expected to succeed when they were together back in the day, an honor like All-Delco is merely an extension toward the next steps of their career.

“I’m not surprised,” he said. “We’ve all been taught that perfection is what we need to do, win games and play as a baseball team, and that’s what we’ve always done.”