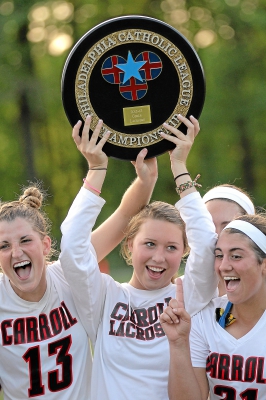 Thirteen up, thirteen down for Archbishop Carroll girls lacrosse. The Patriots claimed their 13th straight Catholic League title with a resounding 20-4 win over Cardinal O’Hara. In the Inter-Ac Invitational semifinal, it was another thriller between The Haverford School and Episcopal Academy. Tommy McNamara and Connor Black made sure the Fords punched their ticket to the final in a 9-8 win. The softball playoffs opened up with mixed results for Delco teams. Upper Darby used a seven-run third inning to rout Souderton, 10-0. The other Central League co-champion, Haverford, wasn’t as lucky as it couldn’t finish the comeback in a 5-4 loss to Avon Grove. Garnet Valley baseball All-Delco Dalton Mayberry had a lot on his mind, something he used as extra motivation to twirl a gem to beat Council Rock South, 1-0, in the opening round of districts. Marple Newtown isn’t pleased with its seed in the AAA bracket, something that’s stoking the Tigers’ fire. Ashlee Fuller‘s big day at the dish helped Bonner-Prendergast softball lead the rest of the action and also make it to the Catholic League title game for the first time since 2006.