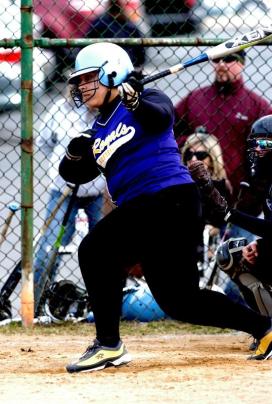 Ishale Toliver and Upper Darby had the bats going Monday afternoon in a 10-0 romp of Souderton.

Well, once again Delaware County puts up a poor showing in the first round. It’s hard to believe that it’s been since 2007 that a Delco team  even advanced to the state playoffs.

– Upper Darby is going to the second round for the third straight year. In fact, the Royals are the only Delco softball team to advance out of the first round in each of the last three seasons. I’ve written it a few times now, but if you’re looking for a refresher, UD lost at Hatboro-Horsham in 2011 and 2012. This time, the Royals head up to Pennsbury to take on the No. 3 seed.

In other words, it’s not going to be any easier this time around for the Royals. This team is obviously built to win right now. Loaded with standout tournament players, it would be a shame to see them not beyond the second round. Unfortunately, once you get up to Bucks County, it’s a completely different level of softball. These girls can flat-out play.

I will say this: I’ve never seen Savannah Nierintz pitch better.  Nierintz pitched in both of those Hatboro-Horsham losses. I remember she pitched fairly decent, too, as a sophomore and junior.  If she is doing her thing, and keeping Pennsbury off the board, I can see UD squeaking out a run or two and winning 1-0 or 2-1… something like that. Easier said than done? Sure, but in softball, anything can happen.

I think Upper Darby is a very, very good team. They deserve better than another second-round exit.

— Haverford High seemed to hurt itself with errors in its loss at home to Avon Grove, the No. 18 seed. The Fords fought back, thanks to a three-hit effort by Maura Cesanek, but couldn’t climb all the way back. I think Haverford needed a dominant pitching performance from Bridget Newman, and that didn’t happen. Avon Grove pitcher Maggie Balint is the real deal. She doesn’t pitch like a freshman, and the Fords found that out the hard way.

— Interboro hung tough against Spring-Ford, losing 3-2. The Bucs left two runners on base in each of the last three innings. They had plenty of opportunities against a tough Rams team.

— Finally, Garnet Valley also had its opportunities to score at North Penn , but didn’t come through in clutch spots. Freshman Sam Tomasetti launched her fifth home run in the loss. GV was a mysterious team all season. Loaded with talent, I expect the Jags should be much stronger next year.

2 thoughts on “Softball: District One Class AAAA First Round Reaction”