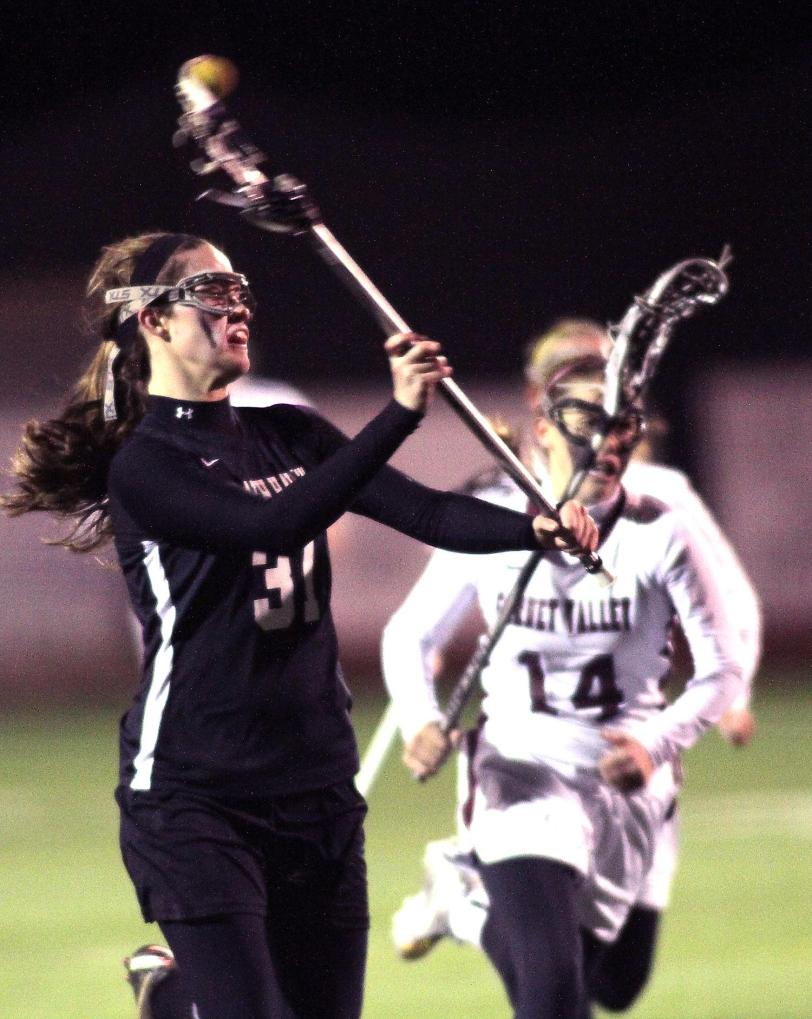 Kirsten Wilhelmsen and Strath Haven made it to the top of the Super 7…and then promptly lost to Radnor.
TIMES STAFF/ROBERT J. GURECKI

Only reflects games played through Wednesday, which is why Radnor is where it is and Strath Haven is where it is. Anywhoo, email is matt.chandik@gmail.com and Twitter is @MattChandik. Go.

It will be a very brief stay atop the Super 7 for the Panthers after their 6-5 loss to Radnor Thursday, unless all hell breaks loose in the Central League this week. That’s too bad because they posted a very impressive 11-10 win over Conestoga Tuesday that “had the feel of a playoff game,” according to coach Rachel Busza. Morgan Glassford had the game-winning goal against the Pioneers because of course she did. That win was particularly impressive because Haven was coming off a stretch of easy games and it’s not always easy to jump back in.

I’m not going to lie. I was very surprised when we got the score in the office that the Patriots had beaten Springfield, 11-8. Not because Carroll isn’t talented, but I felt like maybe the Patriots were a step behind the Central League elite, which further proved what we already know: I know nothing. Taryn Deck pumped in five goals against the Cougars and Sophia Cuzzupe rose to the occasion with 13 saves. Can the Patriots use this as a springboard to a state tournament run?

A precipitous drop all the way down to No. 3 for the Cougars after that loss. Actually, more of a combination of that loss and Strath Haven toppling Conestoga. Rumors are swirling that Springfield played Carroll without a few starters, but I can only rank by what happened, not what might have happened. The Cougars bounced back with a 14-1 throttling of Upper Darby thanks to hat tricks from Emily Santana and Autumn Spence, plus a five-point day from Aly Gormley.

This should be a very momentary stop for the Red Raiders after their big win over Strath Haven. Grace Collins and Brooke Pancoast came up big for Radnor in that one, which came merely two days after dropping a heartbreaker to Harriton. Pancoast and Sydney Cowles had big games in that one and Radnor also boasted an impressive rout of Haverford this past week. Not too bad.

The problem with the Jaguars is that while they’ve been able to beat all of the teams below them in the standings, they haven’t knocked off one of the league’s elites. Maybe that will come in time, especially with such a young team. GV rebounded from a loss to Springfield by crushing Bishop Shanahan and Ridley thanks to back-to-back six-point games from Ashley Pyle and a combined seven points from Sabrina Fusco. A Thursday date with Conestoga will be the Jags’ last chance at beating one of the league’s best teams before playoffs.

The Churchmen could make a heck of a statement by taking out Strath Haven tomorrow at Katie Samson. It’s tough to gauge how good the Inter-Ac is this year with everyone beating each other (except for EA) and few marquee nonleague wins. This one would go a long way for EA. Taryn Gallagher went nuts in wins over Baldwin and Notre Dame to the tune of 11 goals and four assists and MC Curran had hat tricks in both games. Can EA take that momentum into tomorrow?

The Fords were brought back to reality with a humbling 16-8 loss against Radnor. Nikki Harnwell was tested often in that one, coming away with 16 saves, and she then made six in a rout of Penncrest. Amanda Case got back on her scoring track with five goals. Monumental week for Haverford this week as it takes on Penn Charter, Harriton and Strath Haven.