In the interest of full disclosure, I was hoping to go to Haverford Monday, take in a run-of-the-mill game and focus a story on what I though was a cool story with father-and-son tandem Jim and Alex Barr being on opposite sides of the Upper Darby-Haverford divide. Instead, I got anything but an ordinary affair. So here’s all the stuff that didn’t fit in the gamer, and there was plenty. 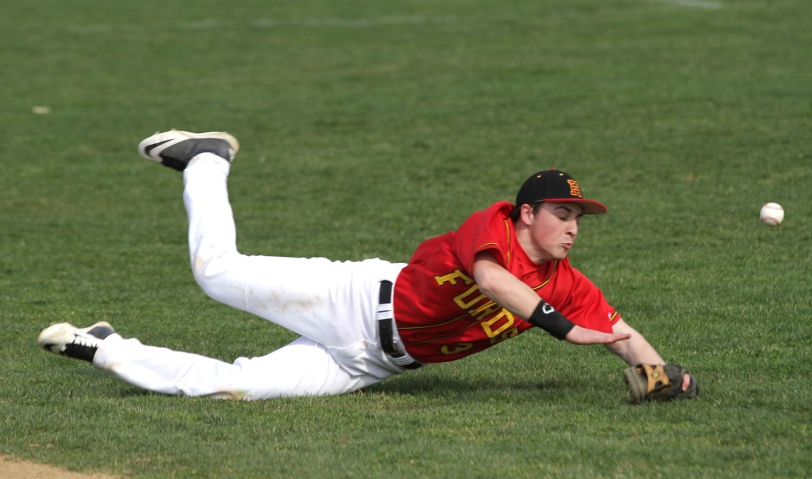 Haverford second baseman Aidan White couldn’t get to this liner, but his bat did the work with a walk-off homer in the Ford’s 18-8 win over Upper Darby Monday. (Times Staff / ROBERT J. GURECKI)

– The most astounding stat from today’s game: All 18 of Haverford’s runs were earned. There wasn’t an error in the bunch for Upper Darby. That tells you something about both teams. The Fords, they can hit. The Royals, they’re not a team that’s in dire straits.

– Astounding stat, version 1A: Haverford didn’t strike out once. They have free swingers but responsible ones. Which leads me to my next point …

– The Upper Darby staff is all kinds of out of sorts. Six games in nine days can do that to you. Brad Houston didn’t have it today, so in came Nick Rotandi and Brian Sloan, two pitchers with very limited varsity experience. They can hit – and opportunistically manufacture runs as they did in the second inning Monday when none of the first five hitters in the rally got the ball out of the infield – and field, but the staff hasn’t yet sorted itself out. The inability to evade Haverford bats Monday is proof of that.

– Credit is due, of course, to the Haverford bats. They hit the ball everywhere, including 18 hits and eight extra-base hits. Aidan White went opposite field on his triple and his homer. Joe Sardella’s homers came to right-center and straightaway left. It seemed the Upper Darby outfielders just couldn’t play far back enough.

– Haverford coach Paul Bogosian calls this the hardest working group he’s ever seen. For a program that has spawned major leaguers, that’s high praise. They’ve been looking for a breakthrough, and finally getting the monkey off their backs will bode well for them.

– It’s worth taking a second look at that second inning. All told, here are the numbers: 12 runs (all earned), 21 batters, 72 pitches, 12 hits, 4 extra-base hits (all by Haverford). It took 52 minutes to finish the first two innings. That’s a bit of offense.

– They may have lost by 10 runs, but Upper Darby didn’t stop pushing. They scored twice in the fourth inning thanks to RBIs from Doug Ward and Kevin Coleman, and they loaded the bases in the fifth with one out but couldn’t cash in. That’s something to build on in the ashes of this loss. “We didn’t really give up,” Coleman said. “We still scored runs later in the game, but as a team we still have to score more runs, and not just in one inning.”

– One more note about Barr: He’s a really good two-strike hitter. His RBI single in the first came on an 0-2 pitch; it was a 1-2 pitch that he lined into center in the second for another RBI. It seemed almost like he was waiting for two strikes to start hitting. That patience and poise at the plate is valuable.

– They don’t get off scot free here: Haverford also has some pitching issues. Andrew Abrahams gutted out four innings when it looked like he’d be lucky to finish the second. Barr, the ace, will go later in the week, but filling in the blanks on those three-game weeks presents a distinct challenge.