Boys Lacrosse: Episcopal Academy puts the state on notice with a rout of La Salle 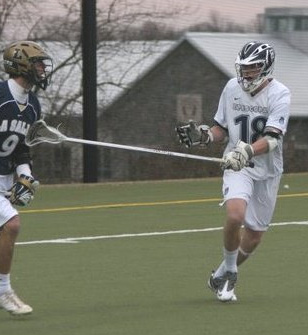 Ed. note: We didn’t have room for another story in today’s paper, so here’s a blog-only story on Episcopal Academy’s 8-2 win over La Salle.

Maybe the Episcopal Academy wasn’t used to handling pressure and expectations. Things are a little bit different this year after the Churchmen beat rival The Haverford School, 15-11, in last year’s Inter-Ac Invitational final. The words “Stay Hungry” emblazoned some practice jerseys with the others proclaiming to “Stay Humble” and that might have been a not-so-subtle message from coach Andy Hayes. Preseason rankings were higher than usual, as were outside expectations, so a 2-3 start wasn’t exactly ideal.

It would be easy to lay some of the blame on a slew of injuries that decimated the Churchmen’s second midfield line, but with Hayes’ mantra being “no excuses”, well, he’d probably prefer to not make any excuses. So after that 2-3 start and the top-ranked team in the state and one of the best in the country in La Salle, including the top-ranked player in the country in Matt Rambo, showing up to Newtown Square Tuesday, this could have gone pretty badly for EA.

Uh, yeah. Bolstered by an incredible defensive performance from close defender Kevin Gayhardt, an 11-for-12 day at the faceoff X from Matt Ernst and four points from Ian Strain, the Churchmen dismantled the Explorers, 8-2, to send a loud and clear statement across the state. EA just might be rounding into form right before Inter-Ac play.

Much of that statement came thanks to Gayhardt. The senior All-Delco Penn commit was, for lack of a better word, out of this world. Tasked with mostly shadowing Rambo the entire way, the 6-4, 210-pounder only ceded one goal to the Maryland-bound attackman 1 vs. 1. Rambo had La Salle’s other goal, but that came on a pick where he was matched up with a short stick, a matchup that Rambo will win every single time. Other than that, Gayhardt stayed in Rambo’s back pocket the entire game, rarely giving him good looks and repeatedly causing him to fire wide.

“I’m really happy with how it went, especially from a team standpoint,” Gayhardt said. “Matt Rambo’s a really, really great player and everybody knows that, and I knew I had my work cut out for me coming into today. I kind of had trouble adjusting to him early. He got to the middle of the field early on me, but I think I settled in and took away his left hand. Our coach (Will) Gibbs does a great job of drawing up defensive schemes and especially the guys on my defense like Matt Robinson and Dante Addona, Chris Fennimore and Raphy Furey, and Colin (Reder) was great in goal.”

OK, so it turns out Gayhardt is as good at deflecting away credit as he is at keeping opposing attackmen at bay, but any superlatives he gets for this performance will be well-deserved. Statistically, he checked in with two caused turnovers and six ground balls, though he also altered a bunch of passes, too. Just for kicks, he also earned an assist when he scooped up a ground ball, ran the length of the field and set up Curtis Zappala for a goal, too. All in all, it was as good a day as you can ask for from a close defender, especially considering Rambo presents so many challenges because of his versatility.

“He can shoot the ball, he can feed the ball, on-ball, when he’s putting his head down, he’s really, really strong,” Gayhardt said. “He’s got a strong lower body and he’s a smart player. He’s as slippery as he is strong, which is a really dangerous combination. We talked about all week how we had a few statement losses, but we needed a statement win. (Tuesday) I think we kind of got that statement win, but we’ve got St. Joe’s Prep on Friday, so we’re looking kind of past this one. We’re excited that we have some momentum.”

Gayhardt was great, but Addona also stood out. The senior St. John’s commit brings the most physicality of anyone on the team and that was evident at one point in the second quarter where Addona threw down Rambo to the ground near the EA crease to help jumpstart a Churchmen clear. When he came back to the sideline, Addona made his feelings on Rambo’s aura of invincibility known.

“He’s like a Greek myth!”, Addona shouted out mockingly.

“He’s going to get his goals and we knew that coming in,” Addona said after the game. “Kev played a hell a game. I’ve been playing against (Rambo) since fifth grade. Ever since he was at Abington, it was like, ‘Oh my God, this kid is, like, Jesus,’ was the comparison. There’s so much hype surrounding him but then you get a kid like Gart, who, people talk about. He gets All-Delco last year because he’s just a shutdown defender. He doesn’t care what people say about anybody. He shut down some of the best seniors last year.”

And he’ll do that this year, too. He’s shut down Downingtown East’s Brandyn O’Connell and Rambo in back-to-back games, so yeah, that’s pretty good. Addona’s not too shabby, either. He’s got the physical edge, but his footwork is also really good and he can keep pace with just about anyone. The Churchmen have as good or better of a 1-2 punch on defense as anyone around and that’s going to help them win a lot of games.

So is the balanced scoring and faceoff dominance they got. Dutch Buckley and Zappala each scored twice, and single tallies from Strain, Peter Gayhardt, Trupert Ortlieb and Tyler Chambers rounded out the scoring. Strain, in particular, was a beast. He had a goal, three assists and five ground balls and he was a dynamo in the transition game. The Lehigh signee presents a wealth of challenges all over the field for the opposition.

“I think we were really happy with the way we finished off the game,” Strain said. “Every game this year, we’ve gone into the third quarter with a lead and we kind of let down and (teams) came back and it really haunted us, so we really dug in today and I’m really proud. Kevin was unbelievable, Colin played great at goalie and we made big plays when we needed to.”

Keeping a consistent offensive presence has been an issue for EA this year, but against the Explorers, they went 3-2-1-2, a sign that they were constantly moving the ball well and not falling into sluggish lulls. Again, they’ll be even better when they’re fully healthy (as will La Salle, who was missing Harvard-bound Sean Coleman, a top-10 player nationally, due to an injury), but the offensive showing was a step in the right direction for the Churchmen.

“It’s just the little things,” Strain said. “Being unselfish, one more step and then sometimes we didn’t finish like we had to. It all came together today. We moved the ball well. I think most of our goals were assisted, so it was a good team effort.”

With no excuses, it had better stay that way to satisfy an ever-growing appetite for an Inter-Ac championship.

One thought on “Boys Lacrosse: Episcopal Academy puts the state on notice with a rout of La Salle”