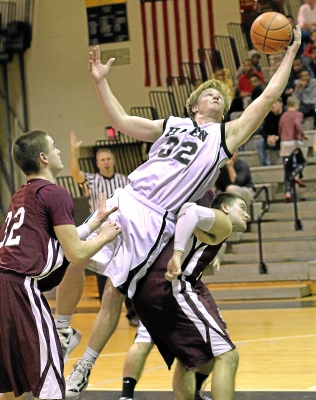 Strath Haven’s Kevin Sherry had the winning points in a 47-45 overtime win over West Chester Henderson in the opening round of the District One Class AAAA playoffs Friday night.
TIMES STAFF/ROBERT J. GURECKI

It was a wild, wild night in the opening round of the District One Class AAAA playoffs. Matt Smith took in the all-Delco affair between Springfield and Upper Darby, one in which the Cougars came away with a wild 56-51 double OT upset win over the Royals, thanks to a clutch 3 from Rebecca Bennett. Harry Chaykun also took in some double overtime, this time as Garnet Valley got key shots from Maddie Ireland and Haley Warden to upend Downingtown East, 50-48. On the boys side, Matt Chandik explains how Strath Haven pulled out all the stops and got a buzzer-beating layup from Eric Trowery to tie things and a putback from Kevin Sherry to knock off West Chester Henderson, 47-45, in overtime. Jim Boyle chronicles Penncrest’s thrilling 49-47 win over Spring-Ford. If swimming’s more your thing, swim guru Matthew De George was on the scene at Centrals, where Haverford’s Connor Hart claimed the 200 freestyle by knocking off Garnet Valley’s Anthony Richardson. On the girls’ side, Penncrest’s Mary Kate Boylan touched the wall first in the 50 free. More swimming leads the high school roundup as Archbishop Carroll had a fruitful day at the District 12 championships.