This Super 7 appeared in today’s edition of the Daily Times. Here’s the reason why your team is ranked where it is. 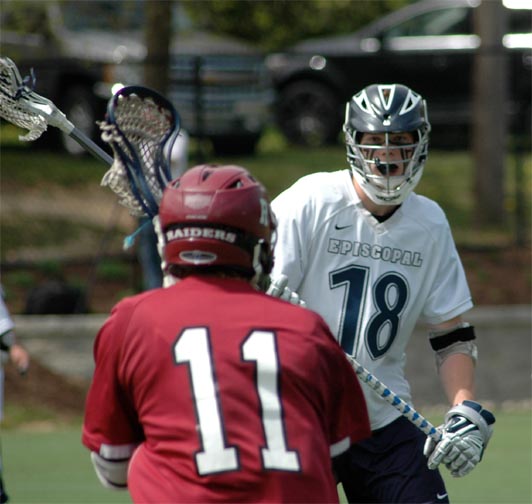 He’s a lacrosse All-Delco and a Penn commit, but Kevin Gayhardt is a big reason why Episcopal Academy makes its first appearance of the year in the Super 7.

Status quo for the Clippers, who opened league play with a pair of impressive Del Val triumphs, including a 78-55 thumping of Penn Wood. Richard Granberry had his second 20-point game of the year with a 23-point night in a 91-50 smacking of Academy Park and Darius Robinson hit nine 3-pointers in the three games (the other a 82-43 trouncing of Reading). Chester is off to Milwaukee this weekend to play in the Brandon Jennings Invitational. The Clippers were initially supposed to have a rematch with Lone Peak (Utah), but instead, they’ll take on Brookfield Central (Wisc.).

The Patriots stay at No. 2 after an 84-43 thrashing of West Catholic, a game in which sophomore sensation Derrick Jones dumped in 15 points and fellow sophomore Nick Jones led all scorers with 17. Carroll takes on Conwell-Egan tonight on the road before hosting traditional Catholic League power Roman Catholic Sunday.

Tyree Bynum just won’t stop scoring. The Texas Southern signee had a game-high 23 points in a 78-55 loss to Chester and then torched Interboro for 20 points in a 77-38 rout. Secean Johnson bounced back from a so-so game against the Clippers by dumping in 19 points against the Bucs and Gemil Holbrook drained 5 3-pointers to highlight his 23-point game against Interboro. I’m interested in seeing how the Patriots fare against Glen Mills this Tuesday in a marquee league game that will go a long way in determining who the league’s second-best team is.

Last week, I thought about bumping the Fords up to 3. This week, I thought about dropping them to 5. So goes the fickle world of power rankings. Think THS was missing Sean Lloyd and his 13 points per game in closer-than-expected wins over Springside Chestnut Hill Academy (53-51) and Malvern Prep (39-37)? Luckily for the Fords, Shawn Alston just keeps coming up big (15.5 ppg this week) and Derek Mountain canned a buzzer-beater to beat the Friars. The Fords get Penn Charter tonight, Prep Charter Saturday and a potentially-Inter-Ac deciding battle at Germantown Academy Tuesday.

Talk about a statement win in a 55-32 rout of Upper Darby. In a topsy-turvy Central League, the Green Raiders have emerged as the No. 2 team behind Lower Merion, especially with the Royals’ win over Penncrest. But that thought will be put to the test Tuesday when Ridley and the Lions tangle. That is, if the Green Raiders can get past Radnor tonight. Ridley put away a pesky Garnet Valley team, 50-39, thanks to a big second-half from Kenny Bartow and Ameer Staggs also had a nice game. The upcoming league slate looks daunting, though, with road trips to Penncrest, Conestoga and Haverford in the next two weeks.

Jay’re Jackson just keeps scoring, this time with 21 points in a 66-48 win over Interboro and 15 in a 69-53 triumph over Chichester. The Battlin’ Bulls will be put to the test Tuesday against Penn Wood, though. Shiheem Spencer is heating up as he dumped in 19 points against the Bucs and 20 against the Eagles. Glen Mills is hot with three straight wins and the more time this team gets to come together and gell, the more dangerous it will become.

Two Inter-Ac teams in the Super 7 and it’s not even lacrosse season yet! The Churchmen have looked sharp in Inter-Ac play with a rout of Malvern Prep (64-47) and a close loss to preseason league favorite Germantown Academy (44-42) when a last second attempt was blocked. Kevin Gayhardt had nine points in both of those games and has been a force on the glass for EA, while Chris McNeal had 22 points against the Friars and 14 against the Patriots. EA faces Penn Charter tonight and then gets archrival The Haverford School and Germantown Academy on back-to-back Fridays after that. Not exactly a light stretch.