Boys Basketball: Clearing out the notebook 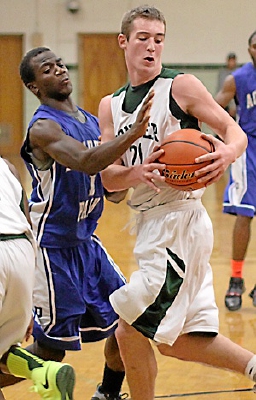 Bonner-Prendergast All-Delco wide receiver Christian Summers, right, is a big reason why the Friars have improved by leaps and bounds this season.

A season ago, Bonner-Prendergast and Garnet Valley combined for three wins.

The Friars carried the load in that duo with a pair of victories, while the Jaguars posted their third straight one-win season.

I’d be highly surprised if the teams combine to post those numbers again at the end of the season, considering they’ve already matched those respective win totals in the first two weeks of the season. Both dropped winnable games this week with Garnet Valley falling to Springfield and Bonner-Prendie getting edged out by Academy Park, but in those games, both teams showed that they’re light years ahead of where they were a season ago.

For the Jaguars, it seems like bringing in new coach Mike Brown is paying immediate dividends. GV isn’t the biggest or most athletic team out there, but the Jaguars make do with what they have. They’re a smart, heady team that needs to rely on the outside shooting in order to win games. Against the Cougars, those shots weren’t falling, especially in the second half, but GV stayed in the game by being aggressive defensivly. Ultimately, Springfield sophomore Kevin McCormick shot the lights out – really, not much you can do when that happens – and Pat McKnight came up big down the stretch. But I came away really liking what I saw from the likes of Jonathan Vandenberg, who’s also one of the most underappreciated lacrosse players in the county, and Joey Sweeney. Sweeney is a pretty tall guy who did some nice things in the paint and also showed an ability to get outside and shoot.

“I think coach Brown’s a great coach,” said Vandenberg, a Furman lacrosse commit. “He’s really working. He’s disciplining us and putting in new stuff and it’s really helping us out a lot. He’s changing the program for the better.”

Vandenberg’s been through it all for the Jags and he admitted that while moral victories don’t offer much, it’s nice to be competing with some of the Central League’s upper echelon teams.

As for the Friars, just being able to suit up and attend Bonner is a victory. especially considering where they were a year ago. When it seemed like a virtual certainty the school would close, it left a pretty uncertain future. But the Friars are back and eons better than they were a year ago. According to leading scorer Pat Vanderslice – who netted a game-high 23 points against the Knights – , part of that is simply growth and maturity, but even Vanderslice had to admit that not having the lingering uncertainty around is also a key factor.

“Last year we didn’t have many veterans and this year we’ve got four, and it’s helped a lot,” Vanderslice said. “That was a shadow over all of us last year for almost half the season.”

The Temple baseball commit is a little bit more physical this year and more low-post oriented – he grabbed nine boards against AP – , but he still shows a sweet shooting stroke from the outside that makes him a tough assignment for any defender.  I loved the effort and hustle from Jack Carden, and All-Delco wide receiver Christian Summers does some really good things, too.

It appears the best way to guard Penn Wood’s Tyree Bynum, at least in the early going, is with a fire extinguisher because he is absolutely scorching. Nothing else is working. Bynum has eclipsed the 20-point mark in all three Patriots games this year – all wins, for the record – and Thursday, he recorded Delco’s first 30-point game of the season when he rang up 32 on Bartram. Bynum wasn’t even the best player on his team last year – you could make the argument he wasn’t even the second-best – but he has absolutely erupted in the early going. It will be interesting to see if he can keep up his 25.67 points per game average throughout the year. I’d be inclined to think he can’t, but Penn Wood has played three pretty good teams and Bynum has torched them all.

Speaking of on fire, Interboro’s Christian Irons is doing it all for the Bucs. As you can see from the leaders page, Bucs coach Jeff Webb’s decision to have Irons handle the ball more is clearly paying off. The junior has a 10-assist game and a nine-assist game, three games of 10 or more rebounds and a pair of 20-point games to his name. IT’S FOUR GAMES IN! Irons has been a beast on the boards several times in his career, but his improved assist numbers are something else.

“He really does everything for them,” said Bonner-Prendergast coach Tom Meakim, whose Friars gave up 21 points, 10 assists and eight rebounds to Irons. “He’s as good as advertised.”

Had to check the history books for this one – and by that, I mean I had to consult Terry Toohey – but it has indeed been confirmed that Chester’s 59-game and counting winning streak is a county record. That includes six straight wins, five of which came in the state tournament run, by double-digits. The Clippers ripped J.P. McCaskey to open the season, 83-57, and heralded Friends’ Central transfer Conrad Chambers didn’t even have to score a single point. Imagine what’s going to happen when he gets going?