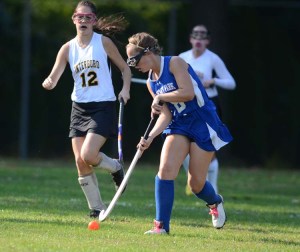 Academy Park’s Nicole Dominick had a pair of goals to help the Knights beat Interboro. Can they parlay that into a Del Val title?

PROSPECT PARK – In a span of 43 seconds, Nicole Dominick sure changed a lot about the Del Val League.

When Dominick fired home a Val Kretenko pass to give Academy Park a one-goal lead over Interboro, and followed it up 43 seconds later on a breakaway goal to give the Knights a 3-1 lead, a lead that became final some 25 minutes later, it not only brought a halt to the Bucs’ dreams of an undefeated Del Val slate, but it also gave the Knights a chance to claw their way into the conversation as a threat to win the league.

Sure, it’s a bit easier to do that when you’re one of three teams in a league and you play every team three times, but that can be one of the few bright spots about playing in the smallest league in the county.

Make no mistake about it. Interboro still controls its destiny with a 3-1 league record, a mark that includes a 2-0 stretch against Chichester and a win over AP. But with a 1-1 record, the Knights also control their destiny, and they can get things done if they can sweep the Eagles and beat the Bucs again. Not easy, but not impossible, either.

“We are so excited and so ready to take on the rest of the season,” midfielder Haley O’Donnell said. “We had a losing streak, but I think that losing streak gave us more motivation to come back and…show us that we deserve this Del Val title. We lost it, and now we need it back. This season’s been motivating us to get it back. I think our practices have been 10 times better, and I never met a group of girls that just want to win so much. ”
One of the moves that has helped the Knights has been moving O’Donnell from defense to midfield. Other than the extra running that it entails, O’Donnell’s enjoyed the move, and it seems to be paying big dividends for AP.

“I love the fact that I have more opportunities to score,” O’Donnell said. “I’ve got to work on my running. There’s just a difference from being the defense where you just protect your end of the field. When you’re a midfielder, you’ve got to protect everything out there. It also changes my attitude toward my game because now I can see 10 times better what really goes on. (Monday against Friends Select) I scored my second goal of the season, so it’s been good.”

Another big reason behind the Knights’ resurgence after a five-game losing skid has been the play of goalie Darriel Bennett. Bennett has been solid all year, but she earned her first shutout in a 3-0 whitewashing of Bishop McDevitt and has allowed only one goal in four of the past five games (with the other being the shutout). She looked impressive against the Bucs with 11 saves. They weren’t always the toughest, but there a few in-close chances where she had to come up big, and she did. She’s an athletic goalie who could use a little bit more polish, but the athleticism is taking her a long way.

“This Interboro (game) was a big win for us,” said Bennett, who upped her season save percentage to 79.7 percent. “It’s a big confidence booster, but then again, we can’t get big-headed and think that we run everything.”

While the Bucs haven’t had one player distinguish herself as the go-to threat on the offense, they provide matchup problems because of their diverse attack and their speed. Those wheels were what concerned Bennett the most heading into the game.

“Their speed (worried us the most),” Bennett said. “They were fast, and they were just getting down there, just left, right, where do you go? How do you think? It was just coming at me all too fast. I just got a good view, I studied people, and from then on everything just goes.”

On the Interboro side, Annette Helmandollar and Brianna Golden were two of the major standouts. Helmandollar is a smart player who always seems to be in the right position and does a good job of controlling the play from her center-mid spot. Golden, on the other hand, is just too fast for anyone to stop one-on-one. Her top-end speed is as good as it gets, and she can put a lot of stress on a defense. The Bucs had their chances on offense, too, including six corners, but they always just seemed a half-step away from converting. I still think Interboro wins the league – there’s me going out on a limb with the odds way in Interboro’s favor – but the Knights are a very athletic team that will stick around until the end.

While AP was busy throwing a monkey wrench into the Del Val pecking order, Radnor just about upended everything about the Central League standings. The Red Raiders upset previously unbeaten and defending Central League champion Conestoga, 5-4, thanks to three goals from Sydney Cowles and the game-winning tally from Lydia Sydnor. Faced with the task of shutting down Pioneers star sophomore Oliver Everts, Radnor head coach Angel DiRocco stuck to her gameplan to help limit the Dutch sniper to two goals and nothing late…sort of.

“My gameplan was to not mark him,” DiRocco said. “Then for whatever reason, we started marking him, and he scored two goals. So we went back to not just marking him, and it helped. Charlotte Posauner did a great job defensively, so much so that their head coach came up to me and was asking, ‘wow, who is she?'”

That’s as big a win as possible for the Red Raiders, who also got 14 saves from Emily Snowden, and of course, it benefits…Strath Haven the most. The Panthers face the Pioneers next Tuesday in a battle, and with Strath Haven now a game up on Conestoga in the standings, it gives the Panthers a bit more breathing room. With the stingy defense that they have, that might be just enough to start thinking of a Central League championship.

Episcopal Academy added to its already impressive résumé Tuesday when the Churchmen took out Archbishop Carroll by a surprising 3-0 margin. I say surprising because the Patriots have an impressive offense that can light things up in a hurry. Carroll had scored at least four goals in four straight games, including a 7-spot against Conwell-Egan, and they rarely tested Gianna Pileggi, who only needed three saves to earn her seventh shutout of the year. That number ties her for the county lead in whitewashings, and she got offensive help from Margaux Paolino, who continued her strong freshman year with a pair of assists.

She got off to a slow start this year with no points in her first three games, but ever since then, Haverford two-time All-Delco Jess McCarthy has been on an absolute tear. In what must be a sheer coincidence, the Fords have also been a ton better. They’ve won five of their past six games, and McCarthy is averaging two points per game in that time with her 10 goals and two assists. Tuesday, she led an 8-0 rout of Upper Darby with her first hat trick of the year and then some, lighting up the Royals for four goals. Haverford dropped out of the most recent Super 7, a decision I know didn’t sit well with the Fords, but if they keep playing like this, it’s going to be tough for them to continue being on the outside looking in.

Don’t look now, but Springfield has a two-game winning streak to its name. Steph Cant set up Nicole Ward for the lone goal in a 1-0 shutout of Marple Newtown that marked the Cougars’ first clean sheet of the year. Ally Scanlon stopped nine shots to get that goose egg. The Cougars will be an interesting team to keep an eye on to see if they can continue this streak.

Sun Valley has struggled this year, but it looks like the Vanguards might have a viable goalie to lean on. Kathryn Delgiorno stopped 18 shots in a 5-1 loss to Great Valley, continuing her strong play of late. In the past four games, Delgiorno has made 46 saves and allowed 2.25 goals per game, a total that also includes five saves in a 2-1 win over Chichester. On the year, Delgiorno has stopped 81.7 percent of the shots fired her way.